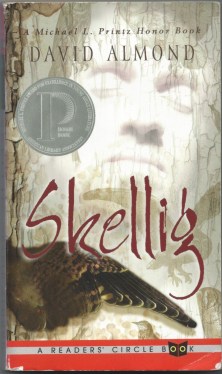 “I thought he was dead. He was sitting with his legs stretched out and his head tipped back against the wall. He was covered with dust and webs like everything else and his face was thin and pale. Dead bluebottles were scattered on his hair and shoulders. I shined the flashlight on his white face and his black suit.”

Michael has reluctantly moved across town to a new house. His baby sister is very ill and his parents are devastated and distracted, leaving Michael depressed and without his old friends. Exploring the overgrown yard, he ventures into a dilapidated garage. He discovers, under cobwebs and dead insects, a strange creature that resembles a weak old man named Skellig. He is such a pathetic being that Michael starts to take care of him. When Michael meets a neighbour, Mina, and he introduces her to Skellig. They move the winged creature to a safer place and take care of him until he starts to gain strength. Michael wonders if Skellig is part angel. Desperately hoping his sister survives a heart operation, Michael tells the creature about her. During the baby’s operation, Michael is sure she has died, but the baby lives, and the mom describes a vivid dream she had in the hospital of a winged creature visiting the baby before the operation. Skellig disappears but the healthy baby arrives home and the family is whole again.

Pros: The cover attracted me first, but soon the lyrical prose drew me in to the characters and the mystery of what and who Skellig was. Was it human, bird, angel or all of the above? The book is very clearly written from a boy’s perspective and voice, and rings genuine. Michael’s family is going through a lot of tension with the baby’s illness, and the mental anguish they are all going through is palpable. But the theme of the power of love carries through to the very satisfying end.

Cons: Michael and Mina associated with this strange human-like creature and hid this fact from their parents, so parents of younger children would have to remind them to never talk to strangers.

Personal Opinion: This is a very well written book with mystery, good character development and suspense, but more than that, Skellig can appeal to both YA and MG readers on different levels. The adventure of finding a mysterious creature in a scary place would appeal to the younger crowd and the lyrical prose and deeper themes would appeal to the older crowd. Skellig has won two awards and was nominated for five more, so this should give readers an idea of how popular the book has been. And I would agree wholeheartedly with their assessments. I highly recommend this book.

Discussion points for parents and teachers:

WRITING FOR NON-ADULTS OF ALL AGES
Join 5,065 other followers