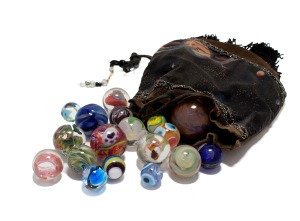 One of my best kept secrets? I collect antique toys. My collection isn’t extensive at this point, nor is it all that valuable. Then again, I don’t collect to get rich. The things I collect make me smile or laugh. One of my most favorite items in my collection are 19th century marbles. They belonged to my great-grandfather, a notorious snake-oil salesman and confidence artist. The picture above show modern marbles, but the photo below are of a few that come from my collection.

The marbles in this second picture are ceramic marbles, common to children living on the US prairie. They may also be called muddles and were made of ceramic material. They would have been fired in a kiln or dried in the sun. Notice that none of the old marbles are perfect spheres?

Technically, my grandfather  was adopted by a notorious flim-flam man as free farm labor. Though I never knew my great-grandfather, I don’t think he was all bad. He at least gave my grandfather toys (I have more of these old marbles, but they’re not pictured). He also kept my grandfather from being shipped to Colorado to work the tin mines. A common practice by Midwestern orphanages for children when they became twelve years-old.

Some types of early marbles were made from glass, but those came from Europe. I don’t think many glass marbles made it west, but I’ve seen pictures of collections from the U.S. eastern seaboard. Prairie children probably knew about glass marbles, but wouldn’t have owned many. The marbles in the picture below are double-glazed, unlike the three single-glazed in the picture above. The double-glazed are heavier and harder, probably used more as a shooter (a taw) than anything else.

Getting fat – losing all of your marbles so that you are out of the game.

Offing – the line from which marbles are shot.

Pound – circle or ring where marbles are placed.

Span – the length between a person’s thumb and smallest finber when the hand is spread apart.

Snop – hit an oppnents’ marble with one of your own.

It seems that most children’s games today involve touching nothing more than a computer keyboard, smart phone, or game console. Once upon time, children used board games, sticks, and many other simple things.

Anyone of you have a favorite “non-electronic” game or toy?