A versatile author—that’s Deborah Dee Harper, who writes humorous mystery and inspirational fiction for both children and adults. Her children’s adventure series, Laramie on the Lam, was published in 2012 and will be re-released in four books soon. Misstep, her 2015 debut adult novel, is published by Write Integrity Press under the Pens of Mystery imprint. Misstep is the first book of her Road’s End series, and from the following description, is a full-flavored read:

Retired Air Force chaplain Hugh Foster and his wife Melanie dream of a peaceful life as innkeepers in the pre-Revolutionary War village of Road’s End, Virginia. When Hugh is pressed into service at tiny but historic Christ Is Lord Church, their dream crumbles right along with the old building. One of Hugh’s first challenges is Emma River, a woman who needs no one—especially God—and lives in seclusion in her home, Rivermanse, guarding her dark secret and hated by most of the town. With a church in desperate need of repair, a dwindling congregation, and a record-breaking blizzard, the town’s residents—comprised mostly of ornery senior citizens—are forced to outwit some drug dealers who are bent on revenge against the church caretaker. Poor drug dealers. 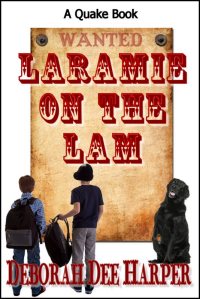 Deborah, welcome to the Scriblerians.

Thanks, Cynhia. I’m so happy to be here.

You like to mix humor, mystery, and spiritual inspiration in your fiction. Which mystery writers influenced you the most and why or how?

I don’t know that mystery writers, per se, influenced me, unless it was just a natural extension of all the reading I did as a kid and beyond. I did love Carolyn Keene’s Nancy Drew books, although I just discovered that Carolyn Keene was a pseudonym and more than one person has written under that name. Nevertheless, I guess you’d say that she (or they, as the case may be) influenced my early writing and started me on the path toward writing mysteries. And by early, I mean about 4th grade. My first mystery was titled, The Mystery of Castle Dawn. That was as far as that ever went—the title. I should finish it someday! Of course, Stephen King, James Patterson, John Grisham, all of whom have some element of mystery in their books are favorites of mine and I suppose that may have rubbed off on me too.

Some elements of Misstep remind me of a few of my favorite movies and television series from the 80s and 90s, such as Funny Farm, Murder She Wrote, and The Golden Girls (without the sexual references and innuendo). Without spoiling the story, please share with us how you used characters and situations to tickle the reader’s funny bone.

In Misstep, one of the characters is a young man about 18 years old who comes to town in the middle of the blizzard. His name is Sherman—a bright, nearly fluorescent orange-haired fellow—who brings Sophie with him to appear in the town’s upcoming outdoor live nativity. Sophie is a camel. With all his other problems, the last thing Hugh Foster needs to take care of is a camel. Nevertheless, Sophie is here and needs a place to stay, so Hugh directs Sherman to pull the camel’s trailer over by the 18th century henhouse. Sherman misunderstands and puts Sophie in the henhouse, which receives several visitors throughout the night, some of them less than happy to see Sophie there.

Is humor a natural part of all your fiction? What other books in addition to the ones already mentioned contain humorous elements?

Yes, humor permeates most of what I write. I’ve written two other books in the Road’s End series, Faux Pas and Misjudge, which are full of humor. Other manuscripts are being developed and they too have an element of humor throughout. It seems to just pour out of me as I write.

It’s a blessing when something comes easily in our writing. So much about being a writer is hard work. Do you have a favorite scripture verse that motivates you as a writer or keeps you centered?

As part of my email signature, I’ve included Psalms 68:3, “But may the righteous be glad and rejoice before God; may they be happy and joyful.” It reminds me that living as a child of God is not only a glorious adventure, it’s filled with humor. God gave us our sense of humor; we need to use it!

More about Deborah and where to connect with her:

Deborah Dee Harper lives in Tennessee but spent four years in Anchorage, Alaska, where she hiked rugged paths to blue glaciers, watched the whales (and otters, sea lions, Dall sheep, ptarmigans, bald eagles, black bears, foxes, wolves, you-name-it) in their glorious natural surroundings. She even chased a grizzly bear down a dirt road to get a picture of it. She got it too (and survived to tell the story)!