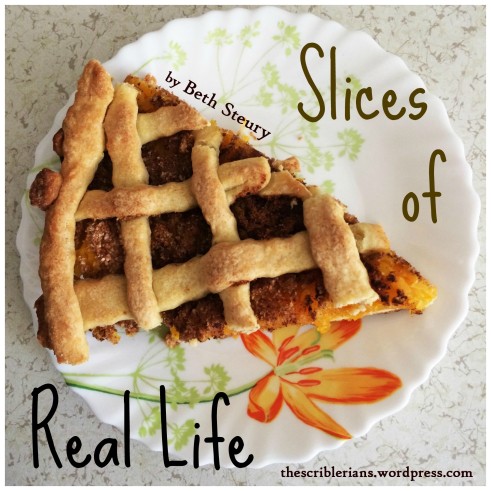 I love it when the happenings of daily life spur a moment of reflection, induce a time of introspection, or launch a fresh prospective. That’s why I’ll be wrapping my Scriblerian column posts around the daily happenings of real life.

Sometimes the insights will focus on one of my great passions: challenging young people to save sex for marriage OR commit to “renewed waiting”, both themes of my “Waiting Matters…Because YOU Matter” blog. Some “slices” will ponder the many complexities of parenting. Others will seek to understand this great big GOD we serve. And some “slices”   will be of a very random nature. I might even on occasion share a recipe for pie. Yum…

Today’s slice comes from the real world of parenting.

A couple weeks back, as I made the first swath across the front yard with the mower, several young men piled out of a couple of vehicles at the neighbor’s house. Cars continued to arrive, bringing more 18 to 21-year-old guys. Soon the sidewalk was littered with duffel bags and coolers, and a hefty pile of personal gear assumed space on the street behind an SUV-type vehicle.

“Must be having some kind of party,” I murmured turning the mower around for yet another swipe toward the garage. Then I remembered—the young man who’d moved in several months before was getting married the next weekend. “Must be having an overnight bachelor’s party,” I surmised. (Yes, I routinely talk to myself while mowing!)

A cluster of guys gathered behind the open hatch of the SUV. Their heads dropped in the direction of the piled high baggage then raised and turned toward the open hatch of the vehicle. A brave young man attempted to stuff another bag into the already full cargo space. Arms folded against t-shirt-clad chests as his effort wedged in one more bag but failed at getting in a second. Then the head scratching began. Literal fingers repeatedly grazing temples as their heads continued the see-saw motion between the pile on the street and the open hatch.

I laughed out loud and announced, “They need a mom.” Everyone knows Moms are great at packing. And she’d make the stumped males realize all the luggage didn’t have to fit in one vehicle. Because all of them wouldn’t fit into one vehicle.  Yep, a mom to swoop in and save the day. That’s what they needed.

My snickering ceased as a serious thought formed and then consumed my mind. Not this time.

A mom to fix their dilemma was not what these young men needed. It was time they learned to figure things out on their own.

I breathed a prayer for safety and wise decision-making on their guys’ weekend. I lifted the soon-to-be-wed couple in prayer as well.

I continued to mow, checking in on them and shaking my head at their slow progress.  A couple more guys arrived as I finished the front and side yards. Luggage still remained scattered about. Although I really wanted to lend just a few minutes of my well-honed packing skills to them, I refrained and instead headed to the backyard.

Later, when I came around the house to get a drink, they were all gone. A few extra vehicles remained but none of the baggage. The street seemed strangely quiet after the hour-long ordeal of preparing for their weekend adventure.

Any one of their moms could have whipped the situation into shape with room to spare. But moms and dads won’t always be around to fix things, to save the day, for these young men. Packing for a weekend away is crazy minor compared to the major stuff these young adults will have to handle in the years ahead.

It’s a truth we all know yet most of us resist it. We have to let our kids do things on their own, make decision and mistakes, then figure out what the next step is. They have to learn to get back up, dust themselves off and keep going.

Cars again lined the street on Sunday evening as the guys returned from their weekend adventure. The unloading process went much quicker than the loading process, and soon they were on their way, none the worse I’m sure for the haphazard packing that accompanied their adventure.

As I’m writing this post, considering how to tie it all together, I get a text from my early-twenty-something son. “Can you talk now?” I answer yes, and a second later he calls with news of the really-not-so-good-kind. I promise I’m not making this up. Any of it.

He shares the very adult-world situation he’s facing, not because he wants us to fix it–he’s very independent–but just because he thought we should know.

The truth is we can’t fix it. And that’s tough for my “fixer-mom” personality to accept. Really tough.

I’m sad, angry, and frustrated that he’s facing this unexpected situation, but I’m happy and proud his call wasn’t in the least about Mom and Dad fixing it.

Anyone who thinks parenting is tough when the kids are little will not want to hear that parenting the YA crowd is far tougher. You find yourself longing for the days when a skinned knee or missing blankie were the biggest crises of the day. Parenting young adults definitely falls in the category of life situations that ramp up a person’s prayer life.

How thankful I am that we serve a Mighty GOD, and I know I can trust HIM with this and every other situation in my life.

Until next time… Praying GOD’s power and presence over my son’s situation, and peace over this mom’s heart.