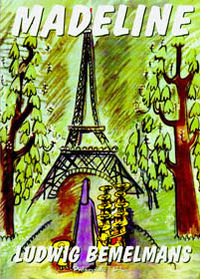 “In an old house in Paris that was covered with vines lived twelve little girls in two straight lines.”

So begins the story of Madeline, and so begins every book in the series.

Madeline lives in a convent most likely in the 1930’s. Her teacher and governess is a nun, Miss Clavel. When I was a child, I thought it was terrible that little girls had to live away from their parents. I assumed Miss Clavel was mean like Snow White’s stepmother. After all, the girls were forced to walk in two straight lines. Because Madeline was the smallest girl, I expected the others to bully her like Cinderella’s stepsisters. Obviously, I’d been reading too many fairytales! Imagine my surprise when I found out that Miss Clavel cried when Madeline had to have an emergency appendectomy, and the other eleven girls begged to visit her in the hospital!

My favorite of the six original books is Madeline and the Bad Hat. Not only is Madeline her spunky, red-headed self, she shows tremendous wisdom in differentiating right and wrong behavior. She will have nothing to do with the boy who is mean. However, once he shows he has changed his ways, she is quick to forgive and happy to be his friend. What a great choice to read aloud over and over again so kindness sinks into our children’s hearts.

Madeline’s creator, Ludwig Bemelmans (1896-1963), emigrated to the United States from Austria in 1914. My Austrian grandfather, only two years older than Bemelmans, also arrived in this country shortly before World War I began. Perhaps, that is one more reason I have an affinity for the author. Both men lived in Brooklyn; both traveled internationally. I wouldn’t be surprised if they knew each other! Unfortunately, I can’t ask them. My grandfather died in 1963 as well.

After Bemelmans’ death, one would assume the Madeline books were done. Enter John Bemelmans Marciano, the author’s grandson. Marciano is an artist and author in his own right. By studying his grandfather’s notes, John wrote five more Madeline tales, eventually adding his own personality to the later books, but Madeline remains the same feisty, mischievous but good child she always was.

In 2014, Marciano put down his pen and declared there would be no further Madeline stories in the foreseeable future. In the same year, he collaborated with the New York Historical Society in preparing an exhibition for the 75th anniversary of the first Madeline book. The curator of the Society, Jane Curley, stated, “We live in a throwaway society, but Madeline endures.”

I agree. Like an overabundant buffet table, our literary world is filled with addictive stories that lure us into the ultra-rich desserts of exotic fantasy worlds (and I love rich desserts!).  Readers toss away perfectly ripe apples of the last century’s bestsellers. We still need the healthy meat and potato meals of solid, simple fiction. What other healthy staples in established literature would you recommend?

3 thoughts on “Madeline: A Wholesome Choice in a Kid Lit Diet”