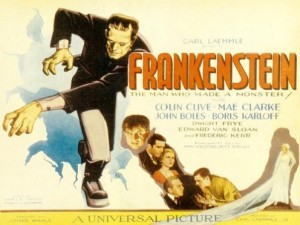 As much as paranormal stories involve the supernatural, and can get by with the inferred presence of the supernatural, a horror story isn’t horror without a monster. Even better, the monster doesn’t always have to be supernatural. Some of the best  monsters are products of science or the act of nature striking back.

Mary Shelly set the bar high when she wrote Frankenstein, and her monster was completely man-made from the hubris of a scientist that wanted to be God. Victor even challenged the sanctity of the womb and look where it got him? The most compelling question a horror story can ask is “who really is the monster ” or “What makes a monster a monster.”

Growing up on Air Force bases, the Saturday afternoon matinee was a staple for my brothers, sister, and me. One of the star attractions were the Japanese monsters. They were created by man’s careless nuclear experiments. Those monsters would be Godzilla, Mothra, Rodan, Monster Zero to name a few. Again, these movies are cautionary tales against hubris. They were also entertaining in a cheesy sort of way.

The modern monster is terrific for addressing those things we find different, or more specifically, the human fear of all things different. A more literary term for the monster is the Other.

If you’re not familiar with the term, think of it this way. there is US in a story. US is how the author infers the audience sees themselves. In a dystopia we may be the subjugated US. Since we all see ourselves as the underdog, its one of the attractions to dystopian novels. A good story can portray the oppressor as US and make us take hard looks at ourselves.

While it’s true the Other doesn’t have to be a monster and may take various forms in other genres. The monster is the best direct use of the concept of the Other. A good example? Think of King Kong. He is a natural creature, and in his environment, the ruler of all he sees. He is a serious competitor for us humans in the chain of life. Pull him out of the environment and make him like a zoo animal? What would that look like? What would that make us look like?

Because the monster seems tailor-made for the role of Other, horror can take on a redeeming quality when it serves as an introspective genre. Well written monsters in well conceived stories become poignant vessels for asking ourselves important questions. This is why I find the negative attitude of the Christian writing community toward the horror genre confusing. Granted there is the attitude that if God is love, we shouldn’t focus on fear. This begs another question, “If you are saved, why are you afraid?” Not all horror has redeeming qualities, but a good horror story is self-illuminating.

Let’s get theological for a moment. If Romans 3:23 pronounces us all sinners, wouldn’t that make us all monsters? I think it is the bad habit of Christians to have of gradating level for judging sin. We often use a smaller measuring stick for looking at our own sins. When we look at the fruit of others, it often seems like the stick gets bigger. For many believers there is the small sins they commit and then there are medium and larger sins of Others. See how that works?

Under the law of Moses sin had such distinctions ascending levels of consequence. Under the New Covenant, the soul that sinneth, it shall die (Ez 18:4). God makes no such distinctions in terms of little sins or big sins. The horror story becomes fertile ground for asking us to do one of the most frightening things a believer can do, examine themselves.

Let me leave you with a quote from 2 Cor. 13:5 AV, “Examine yourselves, whether ye be in the faith; prove your own selves. Know ye not your own selves, how that Jesus Christ is in you, except ye be reprobates?”  Now interchange that word reprobate, which in Greek means castaway, and insert the word monsters.

What do you think?