After the first showing of Fifty Shades of Grey, I watched people on the news being interviewed as they walked out of the theatre. When asked what they thought, women gushed over the movie and stated that they were going out to “look for their own Christian Grey.” 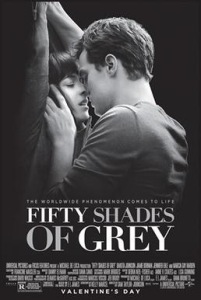 The above victim of the sexual assault, I would imagine, is wishing she never submitted herself to being tied up. And I suspect she wouldn’t agree with the movie goers. With university rape cases being referred to as ‘epidemic’, this movie is likely not going to help the situation.

It is interesting to note, however, that even though the movie has grossed over 300 million worldwide, popularity has diminished, quickly. And rumour has it that Jamie Dornan, the male lead could pull out, as well as the director Sam Taylor-Johnson. Apparently the author E.L. James wanted the director to make the sex scenes even more explicit, closer to what happens in the book. And she may be at the helm controlling the content of the next movie, Fifty Shades Darker.

Whether the books are right or wrong for the big screen in the first place is not E.L. James’ concern. But it is ours now. That in my opinion is what all the fuss is about.

As a parent, I feel it is my responsibility to try and be as effective as I can to steer my kids toward the right movies, books, and mode of thinking as far as sexuality is concerned. Now more than ever, they are receiving so much that I can’t filter. So communication has to be constant.

But enough about what I think. Do you feel all this negative hype is warranted? Are we overreacting?

16 thoughts on “Fifty Shades of Grey… What’s The Fuss?”