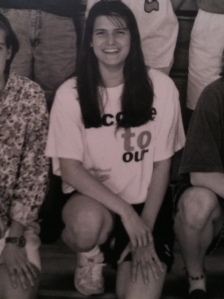 Thanks for signing into our Slam Book, Angie! And thanks for coming on our blog today to talk about your new Christian fantasy, Of The Persecuted. We’d like to learn more about you and your book. Ready for the first question?

Whom did you have in mind when you wrote Of the Persecuted?

AB: Young adult females, particularly those who battle insecurity in even the smallest tasks.

I think all of us battle insecurity at one time or another. I know I do. What do you hope readers will take away from your book?

AB: I hope my readers will see the One True God’s truth. And that He is the answer. To insecurity. To loneliness. To any form in which the enemy challenges each of us.

He is the answer, for sure. Which character is most like you and why?

Laila Pennedy’s insecurity reflects every bit of my self-doubt as a teenager. No matter how obvious the truth was—whether getting good grades, winning races, or…really, any high school achievement—I didn’t believe I was good enough. And I believed I was a burden to the family and friends who supported me. Though my insecurities stemmed from different sources, abuse rather than the loss of those closest to me, I struggled with such emotions throughout my teenage years, and even into adulthood until I came to know Christ.

Lars Landre’s reluctance to lead parallels my experiences. As a cross country runner, as a coach, and as an educator, I’ve often tried to avoid leadership roles, for I prefer to work behind the scenes because I do not like to be the center of attention. But I always end up leading, and I ultimately learned that good leaders aren’t the center of attention.

Zander Costigan’s journey with the Maker mirrors my journey with God. Not the murderous allegiance to the Clan, but his moment of salvation and his subsequent reluctance to forgive himself of his mistakes. He’s actually my favorite character. Most of my readers have mixed emotions about him, and they’re supposed to, but I love him most.

I liked Zander and hope we get to see him more in your next novel. If you could meet one of your characters in real life, which one would it be and what would you do together?

AB: Lars, so he could teach me to shoot and fight. How fun would it be to assume the role of a female Robin Hood type?!?

That would be cool. I’ve always wished I knew how to shoot a bow and arrow or fence, but they’re not very practical today.

For a longer interview with Angie and to read an excerpt from Of The Persecuted, head on over to my blog.

AND NOW, THINK BACK TO THE LAST BOOK YOU READ. WHAT WAS IT AND WHICH CHARACTER WAS MOST LIKE YOU?

IF YOU WANT TO WIN AN E-COPY OF ANGIE’S BOOK, SAY SO IN THE COMMENTS. Winner announced September 4th. Must be 18 to enter. No purchase necessary.

4 thoughts on “Interview with Angie Brashear”